Enrico Caruso, a voice, a legend

The Grand Hotel Vesuvio had a moral obligation to name its roof-garden restaurant after Enrico Caruso, since the tenor was a treasured guest of the hotel . He called it his “Neapolitan home” and after returning to Naples, he spent the last years of his life here.
OPEN
FOR DINNER FROM TUESDAY TO SATURDAY FROM 08.30 PM TO 10.30 PM
ALSO FOR LUNCH ON SATURDAYS AND SUNDAYS FROM 1.00 PM TO 3.00 PM
CLOSED ON MONDAY
Reservations are mandatory and can be confirmed no more than 14 days prior booking’s date.

Pets are not allowed. 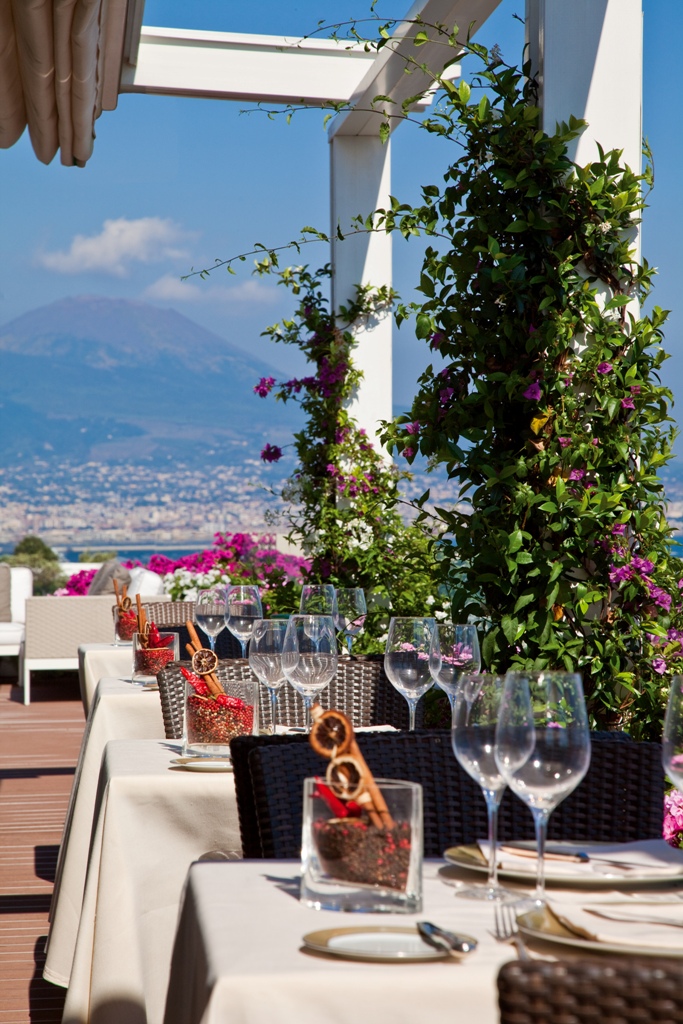 On the evening of December 30th 1901, Enrico Caruso, as yet unknown, was asked to perform as the tenor in the splendid San carlo theatre in the opera “L’Elisir d’Amore” . Unfortunately for Enrico, l’Elisir had a bitter taste when the public audibly voiced its disapproval. However, after the public failure of that unfortunate evening of December 30th 1901 Caruso’s pride as man and artist led him to swear never to sing again in his native city, a promise which he kept until his death. But his love for Naples and nostalgia brought him back, like a lover who has been neglected or betrayed but feels even more attracted to his loved one.The evenings always ended with a Neapolitan song or two. He usually sang “Mamma mia che vuo’ sapé” and ” ‘O sole mio”; after tying a friendship with Gabriele D’Annunzio, he ended this little repertoire with ” ‘A vucchella”. Although he kept his promise never to perform again in Naples, Caruso was Neapolitan through and through: not the Naples of culture and art but of popularity and folklore. All emigrants had to visit both San Gennaro and Don Enrico on their arrival and departure…Another of Caruso’s passions was for food , especially Neapolitan, which he said was the most fragrant, the simplest and the cheapest in the world. He was proud of his role in helping the best Neapolitan pizza makers and cooks make their move to New York, by helping set up a business in “Little Italy”. He hoped to create a corner of his beloved Partenope there , and helped the rise to fame of macaroni from the Amalfi coast, pasta from Gragnano, Torre Annunziata and Torre del Greco, as well as the extra-virgin olive oil from the hills around Sorrento and world reknown San Marzano tomatoes. These products began to penetrate the American markets and some credit is due to the singer who had advertising contracts with a number of firms. Decades later, Enrico Caruso could be described as the most famous ambassador ever of this regional gastronomy. His passion for the cuisine of his native region went hand in hand with his skills as a cook: he was often found in the kitchens of Italian restaurants in Brooklyn. He would invite friends to his great villa to show off his culinary prowess, encouraged by the applause of his entourage. The dish which was most appreciated by his Italo-American friends was “Bucatini alla Caruso“:

Over a low gas, gently fry two cloves of garlic and remove them when golden. Break two large ripe San Marzano tomatoes by hand and slice up one or two yellow or red peppers; raise the heat and season with salt, a pinch of oregano and plenty of basil. Add a red chilli-pepper. On one side, cut two cougettes into slices, flour them and fry. Cook pasta “al dente” and cover with sauce, sprinkle with fried cougettes.

“Bucatini alla Caruso”, at that time as nowdays, is one of favorites that the Caruso Roof Garden offers to its guests, surrounding them with an amazing and intimate atmosphere that dominates the wonderful bay of Naples

INFO
Caruso Roof Garden Restaurant situated on the ninth floor offers a splendid panorama over the Gulf of Naples.
Dedicated to Enrico Caurso who made the Vesuvio his Neapolitan home, the restaurant is a homage to the musical legend but moreover to his great culinary passion.

Pets are not allowed.